Home Back To Top

The Bank dedicated to Aussie businesses has arrived

Judo Bank is a new SME challenger bank built specially to make it easier for Aussie businesses to get the funding they need and the service they deserve. At Judo Bank we’re determined to give Aussie businesses a fairer go. We believe that in business, relationships matter; it’s why our business bankers take the time to truly understand you and your business, face-to-face.

A bank that likes to say yes to businesses At Judo Bank, we’re bringing back the craft of relationship banking to transform banking for Australia’s small and medium-sized businesses. Built from the ground up by a small group of deeply experienced and highly credentialed business banking professionals, Judo Bank is providing a genuine alternative for SMEs to secure the funding they need and the service they deserve.

We provide business lending solutions starting from $250,000 for small to medium-sized businesses. Our team of experienced business bankers are currently located in Melbourne, Sydney and Brisbane, with many more locations to come. Need a facility that provides a source of funds to draw as needed? Our Judo Bank line of credit can assist in managing the cash flow of your business.
Learn More

Need funding to purchase business equipment or vehicles? Our Judo Bank equipment loan allows you to purchase the asset and pay it off over time.
Learn More

Need funding to purchase business equipment or vehicles? Our Judo Bank finance lease allows you to lease the asset for an agreed period.
Learn More We are delighted to introduce the 2019 Annual Review

Our first since being granted a full unrestricted banking licence in April. So much has happened in the last twelve months, it would be an understatement to say 2019 has been a big year.

Judo Bank, in the words of our valued customers.

“Judo was commercial in their approach, listened to my unique circumstance, and tailored a solution that exceeded my expectations."

Judo Bank in the News Do I need a strata inspection report? There’s no time like now for Jos­eph Healy and David Hornery’s capital-munching SME lender Judo Bank to put out its hand out for an extra $400m, putting the start-up close to unicorn status.

The liquidity pool is deep, and Judo has established a track rec­ord of meeting and beating (with apologies to Scott Morrison) its targets. With Judo established on the eastern seaboard and pumping out at least $50m in new lending a week, the co-founders have switched their thinking to the longer term.

The five-year plan, developed 18 months ago, budgets for a near-tenfold expansion in the loan book from $1.1bn to $10bn-$11bn. Momentum is building, and the pipeline boasts well over $1bn in lending opportunities.

The major banks are mostly dismissive of Judo’s ambitions, saying its growth has mainly come from their workout areas where they try with varying ­degrees of success to nurse comatosed customers back to sound ­financial health.

Hornery’s response is: “Well, they would say that, wouldn’t they?”

The reason the two ex-National Australia Bank business bankers brought Judo to life was to bring back the lost art of relationship banking. They espouse the “four Cs” of SME banking — the character of management, the cashflow of the business, the capital in the business in all its forms, and the collateral available to ­secure a loan.

“For the majors, it’s mostly about collateral; they’re very thin on the relationship side,” Hornery says dismissively.

While a ten-fold increase in the loan book by 2023 looks daunting, the pathway is clear. 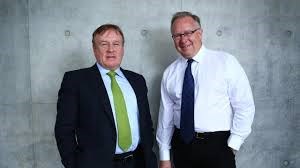 There is a long list of challengers taking on Australian banks, but none is as dangerous or as unique as Judo Bank.

Judo is reviving a branch of the human species that I thought had become extinct decades ago— bankers who are trained to personally assess the character of the small businessperson they are lending to.

And that assessment involves regular visits to the business to “kick the tyres”. It’s old-style, traditional business banking.

As a child I still remember that when the bank manager came to visit my father’s business it was a big event. And the bank manager visits were regular because he had put his reputation on the line, as he had done with many other businesses in the district. The ANZ bank manager was a powerful person in the community.

In today’s world small and medium business banking relies on computer analysis and all too often security over the family home. While it still happens, regular “kicking the tyres” of a small business has become a lost banking art.